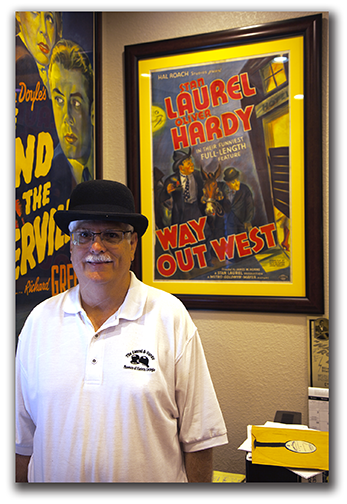 John Tefteller was born and raised in Southern California, not far from Randy Skretvedt. Specializing in nearly impossible to find 1920’s and 1930’s Blues records, he has been a world renowned record collector and dealer since the mid-1970’s.

One of his other passions is collecting Laurel & Hardy memorabilia, which started even earlier, in 1967 — at the tender age of eight. (Pictured above is John in front of the only known copy of the original one-sheet poster for Way Out West.)

In the old days when there was only film, before VHS, Betamax, DVD and Blu-Ray, young John spent much of his childhood allowance buying Laurel & Hardy 8mm reels from the now defunct Blackhawk Films.

During high school, he began a hobby that continues to this day – collecting original still photographs of the comedy duo, many of which appear in this book.

In 1977, John established the Archives Library for The Society to Preserve and Encourage Radio Drama, Variety and Comedy (SPERDVAC) in Los Angeles and was the curator for the next decade.

John and his wife of nearly 40 years, Susie, live in Grants Pass, Oregon and have three adult children: daughters Janelle and Jennifer (who have not inherited the collecting gene) and son Joel (who has)!